Posted on August 3 by Kevin 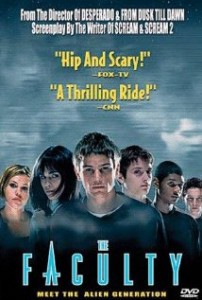 I must admit, this is a film that turned out pretty good for some odd reason.  And please know that when I say ‘good’ it means ‘in comparison to all the other crap I have recently watched’.  You see, on the KevinNeal-O-Meter Movie Rating system it is not easy to get on the ‘good’ rating-scale with anything marginally enjoyable to watch.  I am a tough movie critic!

While I can’t pinpoint the exact reason, or reasons (if there are any other than being entertained) I just found this movie somewhat good.  This is not to say that The Faculty was a must-see.  In fact, far from it but it was amusing for a teen-campy-type flick.

I did really like that the film setup the characters nicely in the opening credits.  Unlike I’ve ever seen before they went through nearly every character and provided a quick name and visual profile.  This set the stage nicely for the rest of the movie to understand the various players in the movie.  I liked this.  Next, and which I did not know at the time, was that this movie released in 1998 was full of what would eventually be several celebrities including Elijah Wood (Lord of the Rings), Jon Stewart (Comedy Central), Josh Hartnett (Black Hawk Down), Selma Hayek, Christopher McDonald (Happy Gilmore) and others.

* Stream of consciousness kicks-in and thinking to myself *:  Now that I consider the fact that I typical despise these sorts of movies, yet I liked this one, could it be attributed to decent acting and not the plot???

The plot was about aliens taking over a high school and everyone is distrusting of each other because the inflicted people don’t have obvious physical symptoms.  Imagine that???  Not that this flicker had anything other than the usual screams, creeps and lame plot for this type of sci-fi/horror film but it was surprising interesting.

My recommendation on this one;  don’t search for it on your favorite video streaming service just yet because it’s not one you want to admit looking for.  But if you are running low on guaranteed good films in your library then The Faculty is a nice transition from a sure-winner to the vast majority of film-garbage available.  Worthy of just-above an average for Steelers Stars to 6 out of 10 possible Steelers Stars.

I am extremely interested in both current events and the ever evolving world of technology. Business and finance have exceedingly become important areas to me, as well. Over the next few years, I hope to log many interesting personal views and opinions concerning important aspects of the world in which we live. Keep in mind that all content posted by me on this web site reflects only my personal views and opinions and not those of anyone else.
View all posts by Kevin →
This entry was posted in Movies and tagged blue-ray, blueray, dvd, faculty, film, flick, hartnett, hayek, movie, movies. Bookmark the permalink.