Welcome to the Neal-Land Zoo

Posted on March 15 by Kevin 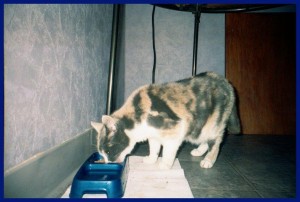 Misty was a beautiful calico cat that came to Brandee and I around the year 2000. Misty’s history is a bit unknown but as far as we could put together she was well cared for during a long period of time until we were blessed with her presence. Our best guess is that she lived a wonderful 22 years.

Most of Misty’s previous history before she came to us was shared by our beloved neighbor at the time, Linda. According to Linda, Misty was a family cat and enjoyed a pleasant life doing whatever it is that cat’s do. After Misty and her family moved a few blocks over, apparently Misty was stubborn and never adjusted to the new neighborhood. She would end up over here with Linda. Eventually she was just a family member of our local neighborhood just like before but with no real home.

Fast forward to around the year 2000. Brandee and I were busy working all day and night trying to build our website business in the den of our office which happened to have a nice big sliding glass door. It was summer and it was hot so we placed some fans in the room to cool the place. That wasn’t enough to dissipate the heat so we would always open the door wide to encourage a cool breeze. Guess who happened to start peeking her head in the door? Yep, Mistis! (By-The-Way, I’m not exactly sure why I started calling her Mistis instead of Misty but I think that was just my term of endearment for her).

At first she was soooooo scared. Of course we were as new to her as she was to us. It was strange but she simply had a genuine attitude. We didn’t want to scare her off and just were simply looking to see if she had a collar with a contact address or micro-chip for identification of her owners- neither of which she had. Anyhow, after a few times of peeking her head in the den to see what was going on then she was finally comfortable with tempting fate and taking the cautious first steps into our home.

After those first cautious steps then we opened our home to Misty wholeheartedly. This simply felt like her “place to be”. We always left our front door and back door wide open so if she wanted to leave and go home then she was certainly able to go, but she stayed. The more Brandee and I got to know Misty the more she grew on us. 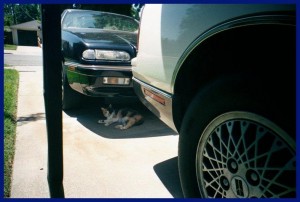 Relaxing under my car.

Misty, Brandee and I enjoyed fun times. In the summer Misty would lounge under my car as seen in the photo to the right. In the winter she would spend most of her time huddled with us in the house with the heater blasting as most sane people would do. She loved to prowl around and watch us humanoids work like a ‘slave to the grind’ while she had not a worry in the world. Sometimes I would go into the front yard when she hadn’t returned when the lights went down (past her cat-few/curfew), and I would bellow “Mistis!!! Come home to daddy!!!”. And guess what? She’d come a-running!

Unfortunately, Misty developed skin cancer on her nose. We did everything we could to get a definitive diagnose, I assure you. In the end, she was just in too much pain and the only humane thing was done. We loved her then, we love her now and we’ll love her forever. We miss you Mistis!

I was devastated by the passing of Misty, I admit it. I swore off ever caring for anything, much less an animal ever again. So, my mom shows up at my house a few weeks later with this little, orange kitten that looked so innocent and sweet. I was a bit pissed off. Not at the kitten, of course, but I was at my mom. However, I do understand that mom was trying to do the right thing for the right reasons. No one can ever, or will ever, replace Misty. 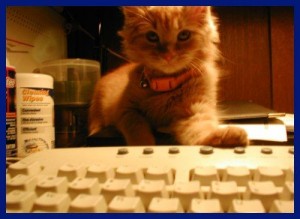 The Orange Thang A- Cometh– Now this little, itty, bity, tiny, nearly hairless furrball of orangeness was in our possession. Great. Well, as any good parent should do, we gave her a name, Isabella Annamarie Neal. Bella immediately became a huge fan of internet computing. She would lay on Brandee’s desk for hours and hours on a laptop watching Brandee work. We finally placed a small cat bed on top of the of the laptop for her to sleep in. Bella was so small when my mom gave her to us (approx. 6 weeks old) that she was nearly the size of the human palm with fingers extended. Roughly 10 inches long, head to tail and including all furr! She was very tiny and hilarious!

Now that our little, nearly hairless, orange fluffball is about to turn 6 years old, we have accepted our fate, errrr, I mean, welcomed her unconditionally. In all seriousness she is a blessing. She is fun. She is humorous. She is temperamental like no other and she’s got character.

You can see my little girl to the right- all decked out with the Steelers colors behind her. Isn’t this just appropriate? During the Super Bowl she was an avid fan for the black and gold like no other. Every now and then I would hear a “meow for the Steelers!” or a “fuurrrrr for Roth!”.

In her younger years she used to have a terrible habit of bring home “presents” to mommy (Brandee) and Daddy (Kevin, me) as a sign of respect from what I understand. As much as we explained to Bella that a slimy salamander was appreciated but not desired, she would continue. She would bring birds, rats, mice and sometimes even grasshoppers! Whatever she could get her paws on was game.

She is a funny baby with a huge personality. Among her favorite tasks are to climb onto the roof during a warm day and just bask in the warm sunshine. Other tricks she likes to perform are death-defying stunts such as amazing leaps of fate that happen to land directly on my feet and cause me pain. Bella likes to be the center of attention. She always has to be in the middle. Overall she’s a good girl though, I have to admit. She comes and goes as she pleases. Unless the weather is ridiculously cold or windy. We generally leave a door open for her to get loose. Even when she’s been gone past her curfew we’ll leave the door slightly-open and guess who comes home after a night on the town, yep, BBBAAAYYY FURRRR!!!! As a feline daddy I can’t approve of this behavior but she does come home to us where it’s safe. 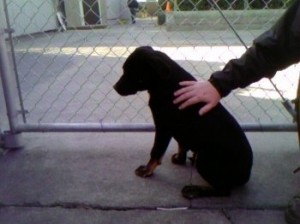 Jackson Nickolas Neal, AKA Jackie, came to us on January 2006. As if Bella, the Orange Terror wasn’t enough, I lost my mind and agree to adopt a dog for my wifes birthday. Honestly, I wanted to have a nice dog to warm our home. Doesn’t a sweet, innocent, cuddly lap-dog sound sweet? Little did I know that this 32 pound little guy seen in the photo to the left would turn out to be such a hunk. Jack is his name and “Jackson” is his proper name when he is in trouble, which he was mostly referred to in his early learning years. We adopted him from the shelter so his true pedigree is unknown however it’s clear that he is mostly Black Labrador Retriever. He must still have a bit of Rottweiler in him and I bet a tad Boxer maybe. He was probably about 3 months old when we were honored with his presence. I was VERY concerned that he would be a problem with Bella; shame on me. It only took a few days for Bella make her alpha position very clear to Jack.

I hear that’s a typical story with most cat/dog introductions, but I had to err on the side of caution and watch Bella all the time in the first few months due to the uncertainty between Jack and Bella. These days I worry much more about Jack than I do Bella. But I still care for both equally. They are truly brother and sister at this point. 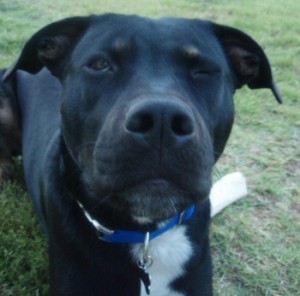 I wink at you because you’ll give me treats!

Jack provides so much comic relief that you can’t believe it. Jack is also a good walker for those that would like to simply take a stroll. Jack is always friendly. He might intimidate people unintentionally because of his size and breeding, but he would never hurt anyone unless they were hurting someone he cares for. If that happens, gawd bless their soul. Jack is the guy who keeps me honest. Jack is the guy that will jump on you regardless of your wishes. Jackie is the guy who will look at your with those sweet, innocent eyes when he knows he is in trouble for something. Jackle is such a wuss when his sister (Bella) decides to teach him something or other. But, overall… Jack is a nice guy. Jack is a baby. Jack is a big dope. Jack is the man!

I am extremely interested in both current events and the ever evolving world of technology. Business and finance have exceedingly become important areas to me, as well. Over the next few years, I hope to log many interesting personal views and opinions concerning important aspects of the world in which we live. Keep in mind that all content posted by me on this web site reflects only my personal views and opinions and not those of anyone else.
View all posts by Kevin →
This entry was posted in Life and Family and tagged animals, bella, Family, jack, kids, misty. Bookmark the permalink.