Posted on May 17 by admin

Today was a day to take some chances on some ‘KevinNeal-Like’ movies and thankfully Brandee was in the mood to let me explore some, let’s say, ‘iffy’-grade movies.  So we selected “Human Centipede” as our first movie to watch today. 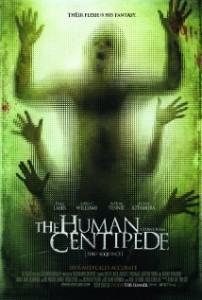 Human Centipede is a movie about a deranged German doctor who has a vision on dissembling, and then re-assembling three human beings into a centipede, obviously.   The movie starts out innocent enough with two girls stuck in the deep forest with car trouble.  Another driver pulls-up alongside the girls who you would think is there to help.  But instead he starts hurling nasty/vulgar language at them in German speech so these two ladies couldn’t understand (however in the movie it was clearly subtitled word-for-word).  I share this because it was a foreshadowing into the rest of the movie.

I must admit that I was somewhat intrigued by the unique plot.  I was interested, as disgusting as it was, in the morbid believability of this movie and the acting was good for a B-grade type film.  Why was it intriguing to me?  Well, they explained the doctor’s intention clearly before he began to dissect these three people into one combined Centipede.

In general I liked the movie even though I’ve expressed several thoughts that could be perceived as negative.  My feelings are if that a movie can elicit an emotion (good or bad), without being completely ridiculous, then that’s a movie worth of debate.  Whether to watch it or not is another story.

In summary, this is certainly a solid NC-17 or X-rated movie, for content in my opinion.  Watch at your own discretion, as I choose to do so, but be prepared to be repulsed.  Human Centipede still tells an incredibly believable story, and good quality cinematography, and I have to be fair and give them an above average Steeler-Star rating of 6 out of 10 Steeler-Stars.

This entry was posted in Movies. Bookmark the permalink.