Posted on February 7 by admin 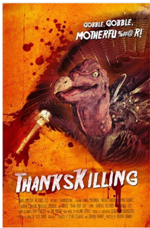 Since today is the official start of the 2014 Winter Olympics in Sochi, Russia I’m going to be in the true Olympic spirit and give this movie, ThanksKilling, a Steelers Star Gold Medal (for stupidity in a film!)  In fact, this movie won all the medals in the Bad Movie competition with the Bronze, Silver and Gold.  ThanksKilling makes you feel dumber for simply watching 1 1/2 hours of this So-chi-T!  I have to give credit where credit is due and considering there was probably about a grand total of two hours pre-planning put into this movie and this resulted in 90 minutes of movie, again, they get credit for making the most out of nothing.  If there was to ever be a great team assembled of terrible movie writer/producers then the ‘talent’ that created ThanksKilling should win Gold for the next 4 Olympics with this disaster of a movie. Who says quality counts anyhow?

The Bronze goes to the absolutely horrible acting that didn’t even begin to try and be serious.  Surprisingly enough it did not bother me as it typically would.  Something about this particular set of Olympic/Actor wannabees is curiously fun.  The characters were so ridiculous that you didn’t even have one iota of believe-ability with these Turkeys (Thanksgiving pun intended).

Next, the Silver medal for ThanksKilling goes to the ridiculous plot of the movie.  A killer Turkey, are you serious?  Somehow every 505 years the killer Turkey comes back to terrorize the human race.  The over-dramatic scenes are simply awesome.  With just a bit more gravy (Turkey pun intended) the plot itself might have been worthy of the Gold medal.

However, only one Gold medal can be awarded and this goes to the killer Turkey himself.  His foul-mouth language, rotten behavior and witty remarks were simply a s’mash’; potato (more Turkey/Thanksgiving pun intended).  Classic lines from Turkie (a.k.a. Killer Turkey who is the main character) spoken include “I quit him cold Turkey!”, “She got stuffed!” and “I’m making a Turkey sandwich”.

So, for this one exception I deem the award for this movie in Steelers Star Olympic Medals with 8 out of 10 stars (but don’t be a Turkie you yams!).

This entry was posted in Movies and tagged movie, thankskilling, turkey. Bookmark the permalink.