Posted on June 13 by admin

One of the fun things that Brandee and I have enjoyed doing recently is going and walking around the local flea market. We don’t go to ever buy anything really, we just leisurely browse the stands and enjoy being in the nice sunshine together. An odd thing that we did discovered, and which is very surprising, is that for the few items which we did actually ask about the price, it turns out that the flea market price was higher than you would expect for things that you can find at regular stores. I always thought that the flea market was for cheaper things but we hadn’t been in a while. Things have really changed and I don’t know why anyone would want to pay more for flea market items that are exactly that same that you can get cheaper and elsewhere???  Anyhow, there must be some logic for this that we don’t understand. 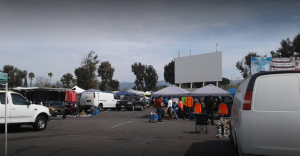 There are two rather famous flea markets organized in San Jose. We generally go to the smaller of the two. The Capital Drive-In Flea Market is held at, as you can imagine, a Drive-In Theater Parking Lot. Many years ago there was no such flea market at the drive-in but I can probably guess that this is now a good portion of their revenue as less and less people tend to go to drive-in movies.

I’ve also really enjoyed reconnecting with my friends again for little things like a business lunch. Although we do talk a little bit of business, we mostly talk about life, family, sports and sometimes politics. After being confined to the house mostly and not being able to drive for seven months, this little luxury of socializing with friends is that even more of a pleasure.

This entry was posted in Friends, Life and Family, Movies. Bookmark the permalink.