Posted on August 9 by Kevin 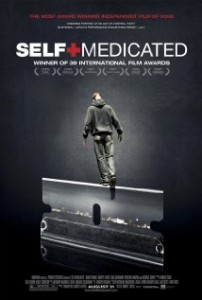 This was a guest movie review post by one of our fans:

This was a pretty good movie that really tugs at your emotions with a story about a Mother-Son relationship.

‘Self-Medicated (2005) Rated: R’ starts by establishing one of the main characters, Andrew, who is a 17 1/2 year old boy.  He’s a teenager where he likes to be with his friends, drink to excess and experiment in life.  Some of his activities are reckless and overboard.

It’s clear that Andrew and his mother had enjoyed a good relationship previously, yet had been somewhat strained since the passing of their father/husband for some unknown reason (this was not relevant to the plot – so I’m glad it ‘didn’t go there’).  Next, Andrew’s mother, had him forcefully admitted to a rehabilitation facility.  She had every good intention but this facility turned out to be basically a mental institution.  This was NOT a place for Andrew but his Mother had no knowledge of how they were treating her son.  They would keep him in solitary confinement for hours, or threaten him by having him write written essays of ‘500 words’ or ‘1000 words’ at a time.

In the end, the movie had a good moral plot and if people would listen to each other, and not get defensive, then what this kid was put through wouldn’t have happened.  It’s a classic story of people living in glass houses and throwing stones at others for reasons they don’t understand because they assume instead of taking the time to understand.

I am extremely interested in both current events and the ever evolving world of technology. Business and finance have exceedingly become important areas to me, as well. Over the next few years, I hope to log many interesting personal views and opinions concerning important aspects of the world in which we live. Keep in mind that all content posted by me on this web site reflects only my personal views and opinions and not those of anyone else.
View all posts by Kevin →
This entry was posted in Movies and tagged brandee, cruise, medicate, medicated, movie, oblivion, review, tom. Bookmark the permalink.