Posted on July 9 by admin 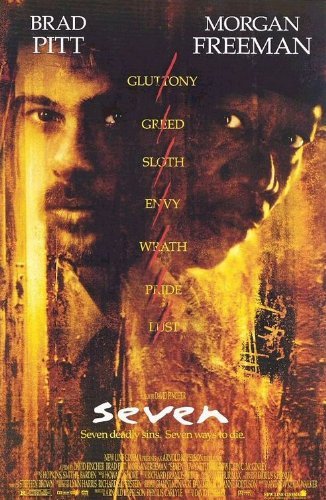 Se7en is a creepy police story. First of all this movie has some of my personal favorite actors of Morgan Freeman, Brad Pitt and Kevin Spacey. Not that this really mattered when I first saw this movie because I was more intrigued with the plot itself.

The plot of the movie was interesting; in a distributing sort of fashion. This movie is about the ‘Seven Deadly Sins” which are ‘hubristic pride, greed, lust, malicious envy, gluttony, inordinate anger, and sloth’.

Morgan Freeman plays the role of an experienced murder investigator who is wise and deliberate in his actions. On the contrary, Brad Pitt plays the role of a young, unexperienced detective who is quick-tempered and impressionable. I have to say that these guys hit homeruns in each of their roles.

So, for the movie itself, there is a series of murders. Seven of them. As every murder happens Se7en creates a compelling story. For each of the seven sins the movie shares a good story to describe each of pride, greed, lust and such. I have to admit that some of it is rather disgusting but it was powerful none-the-less.

For this classic movie, Se7en, I score this movie as 9 out of 10 Steeler Stars. This is an abnormally high rating so please let me explain. First, there was great acting which was absolutely believable. Second, the progressive plot of the movie was interesting to me. Third, a strange and unexpected plot-twist was fabulous.

This entry was posted in Movies and tagged 7, se7en, seven. Bookmark the permalink.