Posted on January 11 by Kevin 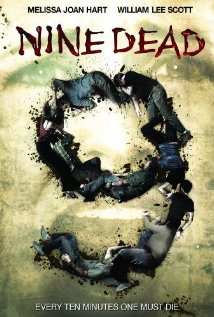 Nine Dead starring  Melissa Joan Hart and William Lee Scott, is a movie about nine men and women from all walks of life who awake to find themselves abducted and chained to poles in the proverbial freakadelic room. Professionally, the characters run the gamut from a merchant and a deputy district attorney, to a police detective and a common street thug. We round out this crew with a Roman Catholic Priest and a Chinese woman who can speak no English. Seemingly, there is nothing these people could possibly have in common… they better figure it out, however. Because every 10 minutes their captor intends to kill them in a very precise order, one by one, until they either make the connection between them or they’re all dead.

This movie could have been great, but it wasn’t. It had a good story line, plot and the ending would have almost made it worth watching. Bad casting, overacting and terrible camera work killed this movie from the beginning. In fact, it was so bad I only agreed to do this review for my husband if he promised to never make we watch it again.

Think of Nine Dead as a sad, watered down version of SAW with less gruesome gore and intricate fabrications. We can only pray that unlike Saw, the makers of Nine Dead know when to quit and never make another chapter of this miserable movie.

I am extremely interested in both current events and the ever evolving world of technology. Business and finance have exceedingly become important areas to me, as well. Over the next few years, I hope to log many interesting personal views and opinions concerning important aspects of the world in which we live. Keep in mind that all content posted by me on this web site reflects only my personal views and opinions and not those of anyone else.
View all posts by Kevin →
This entry was posted in Movies and tagged dead, drama, hart, horror, joan, melissa, movie, nine, nine dead. Bookmark the permalink.