Posted on November 18 by admin

Kevin Neal from California (in the news) – #NotThatKevinNeal

I need to make a quick Public Service Announcement before I get into my Life Updates.  I am not THAT Kevin Neal.

On November 14th, 2017 there was a truly awful shooting where a lunatic, coincidently enough, named Kevin Neal and, also coincidently enough, was from California murdered several innocent people.  I do not know this person, never have and never will.  I feel such sadness for his victims and pray that they rest in peace. 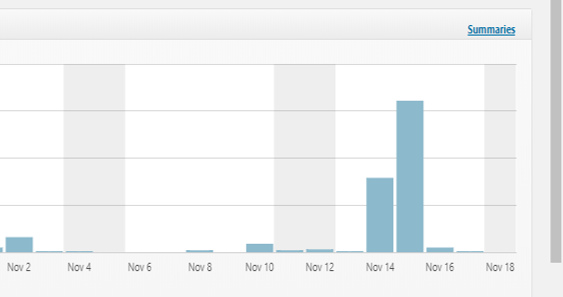 Not to make light of this awful tragedy but one rather strange thing that happened is overnight my Facebook and this Blog was of high interest all of a sudden.  In fact, I bet some of you reading my words right now are just curious people.  I admit that I sometimes do the same.  Anyhow I met a few people on Facebook that just said a friendly hello so that was fairly cool to see the decency of people in such times.  Just take a look at the drastic spike in my Blog traffic and you can clearly see when the news hit on 11/14.

………….and now that this Public Service Announcement is over, let us turn you to the regularly scheduled Kevin Neal Life Update…………

It’s been nearly two full months since I sustained my rather serious ankle injury on September 23rd, 2017.  As I’ve expressed many times before, this injury certainly could have been much worse so I’m absolutely not going to complain about much. However, being in a hard cast for all this time is getting super annoying. I obviously still can’t drive and won’t be able to for months still. I can’t even start rehab yet because the bones are still mending. The good news is that at my last check-up with the doctor he said the x-ray looked pretty good and we are ahead of the original schedule.

I still will be in a hard cast for another three weeks and then hopefully a removal boot. Rehab might start after the being of the new year.  Oh vie!!!  There isn’t so much pain any more but the hassle of doing every little thing that takes so much longer and planning is about on my last nerve.  Things like this really make a person humble and also make you appreciate everything that is so good about being healthy.  I’ll just continue trying to be positive and do my best to get through because there isn’t much I can do to accelerate my healing.

Although I’m not completely stuck at home with my ankle injury and I manage to get out for about one or two meetings per week, I’ve been spending most of my ‘downtime’ being as productive as can be.  I want to take full advantage of my time and utilize it for productive things. Therefore, I have been doing a ton of research, training and experimenting on many new technical technologies.  It is true that there is so many new things, new concepts, new vendors, new approaches and such that it will be impossible for anyone to ever fully grasp all this knowledge.  As I have always appreciated when others share their knowledge with me; I like to reciprocate and share my knowledge with them.  This is absolutely required more than ever and not only when it comes to technology itself but also how business is done.  Business has to be more agile, nimble and willing to change more than ever because consumers are empowered like never before.

For these reasons, I feel that if I can gain valuable personal knowledge, with hands-on learning, for such things as Amazon Web Services (AWS), Oracle Cloud Infrastructure (OCI), Google Cloud Platform (GCP), Microsoft Azure Cloud and others then I sincerely hope I can accelerate the overall knowledge of my colleagues, friends as well as our valued clients.  My brain is certainly on overload right now from all the learning I’ve been doing but it feels great and I feel that 80% is sinking in already.  I’m immediately being able to put a lot of this learning into practical use.  This other 20% is still somewhat foreign to me and I can only hope that knowledge transfer can help everyone work together and reach their full potential.

It has always been a personal work character trait of mine to work even harder while others relax.  It could be coincidence or by conscience decision but so much of my work history has been working with people in other countries, and time zones, that I often work unnatural hours late at night or early mornings. Or it could be that so much of my work is being creative with marketing activities or critical thinking with technical work, that it just helps me concentrate and be more productive in downtimes. Or it could be that I’m just a workaholic like my wonderful dad was 😊.

Whatever the case maybe I double my efforts during the holiday season to really digest everything from the past year and get organized with a solid plan for the future.  I simply hate waiting for things to happen so while people stuff their faces with Turkey and participate in all the fun activities, I’m generally spending my time writing a plan, creating some marketing materials or planning a communication in some capacity or another.  Don’t get me wrong, I enjoy having fun during the holidays and like time to relax a bit but it just gets old for me rather quick and I would rather spend my time in the present bettering my life in the future.

Business is super good and our plan is coming along ahead of schedule.  We planned well to be ahead of the onslaught of ‘cloud computing’ crush and now our Company is positioned extremely well with excellent knowledge, great solutions and a fantastic business plan. We have the right People, Process and Policy all in-place for a successful outcome and we can’t be any more excited about the upcoming year!

Crazy FurrBalls and a Change of Season

Jack, Gracie and Bleu continue to provide a ton of comic relief at the Neal Casa. Brandee and I can already tell that the turn of seasons from fall to winter is not going to be an easy one for Gracie and Bleu especially. Jack is old-hat at the seasonal changes but Gracie is inexperienced as she just turned 1-year old a few weeks ago. And for Bleu, since she was born in the March-April 2017 timeframe, the dew on the grass or the rain drops from heaven are all new, exciting (and sometimes treacherous) challenges for her to overcome.

For our best guy, Jackson, he continues to provide sanity and wisdom for his rambunctious sisters. Once in a while he’ll get in a playful mood and have a little rough-house fun with Gracie. On the other hand, Jack and Bleu rarely interact with each other. They just act as if each other didn’t exist. Jack is such a good boy with his little sisters and he’s so gentle with them.  One thing that is for sure is that poor Jack still does miss his older sissy, the beautiful Bella, as do both Brandee and I.  Bella was such a precious and unique little furry, fluff of fun.  She filled our hearts with joy and the pain of losing her in April is still tremendous and probably will never cease.  Jack, Brandee and I are at peace that our lovely Bella-Ringa is healthy and happy at Rainbow Bridge.

Preparing for the Holidays

Well it’s that exciting time of the year where, once again, where the months of October-December become all smashed together in a blurry haze with so many birthdays, holidays and just overall busyness going on.  This year is no exception with Halloween already have flown by and Thanksgiving upon us in just a few days.  It’s the time of year when Brandee over thinks plans for Thanksgiving and plans a meal for an army.  I kid but it’s great fun for her and she says relaxing but I can’t imagine so as it seems like so much work!  Nevertheless, she has fun and enjoys doing it so it’s all worth it in the long run.

I think this time of year is very special for Brandee in particular.  She loves so many of the great qualities of the holiday spirit including spending time with family and friends, children running around crazily everywhere and the general good-vibe that the holidays bring.  She can careless about the commercialism that the season brings but there is so much more positive than just minor annoyances.

Here’s to wishing everyone a great, safe and enjoyable Holiday Season!!!

This entry was posted in Bella, Bleu, Gracie, Jack, Technology. Bookmark the permalink.