Posted on April 27 by admin

Today, 4/25/2014, another busy but great trip to Japan is ‘in the books’ as they say.  All that’s left is a short walk to the train station, a 1 ½ hour express train ride to the airport, a few hours of waiting and then a joyous 10 hour flight home.

This is the part of traveling to Japan that gets particularly interesting.  It’s basically Groundhog Day where I get to relive a period in-time in which I had already experienced.  I’ll be leaving Japan at 3:55pm on Friday afternoon and arrive home at 12:40pm Friday.  Do the math for yourself.  Yes, that’s right; I will land in the US 3 hours and 15 minutes BEFORE I left Japan 10 hours earlier!  Living the same day two times is absolutely a trip.

As I have written previously many times, one of the consistent great things about traveling to Japan is the wonderful people and culture.  That part of visiting never disappoints.  This particular trip featured some new highlights and I would like to share those experiences. 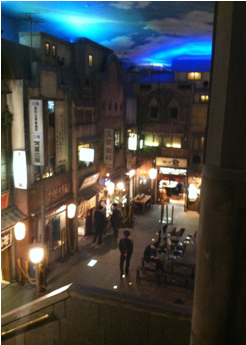 We visited the Shin-Yokohama Raumen Museum.  It was great fun and we ate two lunches.  One lunch was a mild-flavored ramen and the other was a more hot-and-spicy flavor.  Both were delicious!  The Museum itself was awesome.  All the storefronts had a different theme and felt like a Hollywood movie-set with all the various settings.

The environment was so much fun.  In the courtyard of the museum, pictured left, the security officers were teaching young school-kids how to play games and such.

Below is a brief summary of the Raumen Museum:

http://www.raumen.co.jp/english/  Shin-Yokohama Raumen Museum was founded on March 6th, 1994 as the world’s first food-themed amusement park. From the start, our concept has been to be the one-stop place to enjoy the flavors of this national dish from renowned shops across Japan without stepping on a plane. 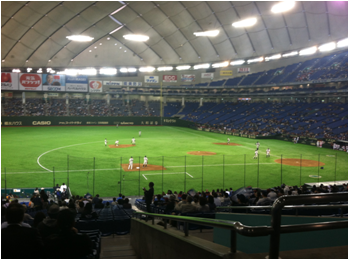 Another highlight for this particular trip was attending a professional Japanese baseball game.  This game featured the Rakuten Golden Eagles and Seibu Lions.

The Eagles were the home team and their fans were extremely passionate however the Lions also had some extremely loud supporters as well.  Some of the Lions fans included drums, trumpets, flag-waving, organized chanting; showing great team spirit.

The game itself was a blow-out and the end-result was never really in question.  The Eagles scored at-will in the first few innings and built a 5-0 lead, never to be relinquished.  The final score of 6-1 did not accurately portray how much Rakuten dominated this game. 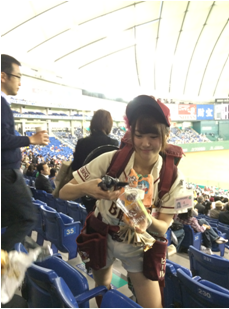 The game was held at the famous Tokyo Dome.  The Dome was pretty typical of traditional stadiums with a few exceptions.  First, there was no parking lot for cars.  All the fans, including us, were transported via train or some other means of public transportation.  Second, there were no, or meager, lines to enter the stadium or get food and drink.  Everything is always so efficient.

The food at the game was quite similar to American baseball with a few exceptions.  The concession stands included typical items such as popcorn, souvenirs and drinks.  The extreme enthusiasm in which the Japanese people celebrate friendship is a noticeable, positive, experience.

One of the extreme highlights of the baseball game was the ‘beer girls’.  There was nothing not to like about this.  They had quantities of them (check), they had kegs/booze strapped to their backs (check) and they all had cheerful attitudes (check)!  All kidding aside, the sincere enthusiasm for working and having fun was absolutely refreshing.

This entry was posted in Business and Finance and tagged baseball, eagles, lions, Museum, Raumen. Bookmark the permalink.