Posted on October 11 by admin

This year for our annual ‘guys’ camping weekend, the five of us headed up to a new spot we had never camped together previously. It was a gorgeous cabin-camping area called Camp Layman located in the beautiful Plumas National Forest.

The destination of these yearly cabin-camping trips is always different and picked by our fearless leader, Frank-buddy.  I generally don’t pay any sort of attention to where we are going other we will be camping in the Forest somewhere. 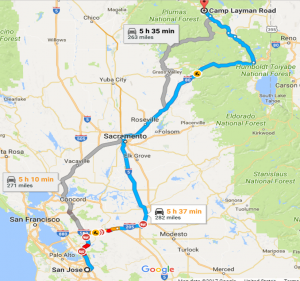 We generally take a similar route out of San Jose and head Northeast for roughly a 4-hour drive and then the last 1 hour of the drive takes us to our unique destination.  However, on the drive to this year’s cabin as we approached the 4-hour drive time the road became strangely familiar to me. As it turns out, ironically enough, Camp Layman is located just outside of a small town called Graeagle. Graegale is where we host our annual guys weekend golf tournament!

I instantly had a great feeling that the guys and I were going to have a great and fun experience because, having spent so much time in the Graeagle area, I knew the location was nice, the people are extremely friendly and we weren’t so remote that we didn’t have resources such as a locate grocery store, if needed. 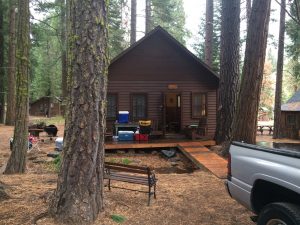 Upon arrival we were greeted by the extremely friendly camp hosts. They provided us with all the camp information such as the amenities of the cabins, which did NOT include internet service, as well as other things we should know such a communal fire pit and BBQ area. The overall experience at Camp Layman was so wonderful because everything was so clean and taken care of. The camp hosts really encourage these sorts of communal activities and all of the cabins instantly became friends amongst each other.

The cabins themselves are super clean and have everything we need as we were ‘roughing it’. Inside the cabins, they have hot showers, a stove with plenty of dishes, a coffee pot, refrigerator and, for the first time in our cabin-camping experience, some really nice interior decorations. There were several beautifully hand-drawings handing on the walls. 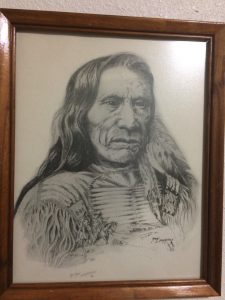 Our cabin was 4-5-person capacity with four beds. So, before you jump to any conclusions about the sleeping arrangements how 5 guys and 4 beds works out, let me just say that, as in every previous year, I just end of sleeping on the couch. I actually prefer this because I like to spend all of my waking time chatting and having a good time with the guys so there generally isn’t much sleeping happening anyway.  Being a couch-dweller enables me to be in the middle of the action at all times.

There were roughly 15-20 total cabins at Camp Layman of various sizes and capacities.  Some looked like they could be 1-2-person cabins and then there was at least one cabin that was 10-12-person capacity. There was a nice little creek that ran out front of each cabin which was a nice little, subtle touch of ambiance. 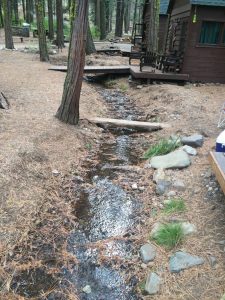 The guys and I would spend our days hiking, shooting, conversing about politics, sports and family-life. Then each afternoon we would do a delicious BBQ for lunch. One of the other nice things about Camp Layman was that they provided a BBQ grill for each cabin. We always bring our own but it was nice to not have to haul out our BBQ. This was a nice surprise that allowed the campers more time to enjoy each other’s company instead of hauling gear.

In the evening’s each night the five of us would gather at the communal fire pit with our fellow Camp Layman campers and spend some really great time getting to know each other and sharing interesting stories.

So, in summary, let me please provide my ratings:

I had a lot of fun guys and I look forward to next year!

This entry was posted in Camping, Life and Family, Travel and tagged camp layman. Bookmark the permalink.