Posted on December 15 by admin

Let me start this story and cut right to the chase. At my recent physical therapy visit there was an error in my medical record chart.

This was no big deal for me other than just setting the record straight with the therapist but, as you might imagine, it could have negative implications for the person whom this important information is most likely missing from their medical record chart because it was in my chart instead of theirs.

How or why this happened is something I can not know for sure but I can only assume it was an honest mistake. Everyone gets busy or distracted at times during their work day and somehow these records ended-up in my chart and not this other patient.

However, the big question I consider in situations like this is ‘what can be done to avoid this sort of medical record records mistake in the future?’. This was my immediate thought after I noticed the look on my physical therapist face when he realized the mistake. Let me briefly explain.

I was at my first physical therapy appointment since ‘ankle’ surgery a few months ago where I was the fortunate recipient of several titanium plates and complimentary screws. As the nice therapist was asking the normal background questions that are to be expected, and I was answering accordingly, he then asked a stunner.

He asked, “well, Kevin, you have a lot of metal in that ankle so how is the other metal in your knee feeling?”. 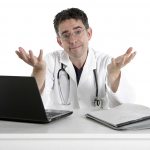 Naturally shocked, I said, “uhhh, sorry sir, no metal in my knee and no surgery on my knee ever”. I then turned to my wife and said, “Honey, you see this is prime example of where a Blockchain for Healthcare could have prevented such a mistake in my medical record”. We both had a chuckle then we moved on to the rest of my ankle rehab session.

However, and in all seriousness, this simple little incident is a real-world example that likely happens on a regular basis all across the country and all around the world. It simply should not happen with today’s modern technological innovations.

Specifically, I’m referring to a few simple modern technological concepts that are real, possible and should be implemented for the better accuracy of not only medical records, but in every business and all industries. These concepts are Digital Ledger Technology (DLT), Smart Contracts and Consensus or to summarize, Blockchain.

Why wouldn’t have this erroneous record made it into my medical chart when it wasn’t truly linked to me? In a blockchain it’s really easy to understand how this could have been prevented through a ‘consensus’ network. Consensus in blockchain, and there are several ways to arrive at consensus, is just like you might imagine in that there is basically a consensus decision among peers of ‘yes’ or ‘no’ to a particular question or request. So, in my specific case, when the incorrect knee surgery chart information was being submitted into my medical record chart the system itself should have formed a consensus that this was not a valid transaction and not allowed it. Ideally it would have kicked off an exception workflow process for handling such situations. 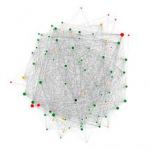 Consensus is formed by a network of distributed computers (i.e. ‘cloud computing’) using Smart Contracts. Smart Contracts, as it relates to blockchain, are basically decision makers. Software developers and/or organizations themselves, which have deep knowledge of their particular vertical markets, can rather easily create Smart Contracts which can allow computers to make informed decisions based on all the intelligent data available. And, believe me, there is a lot of electronic data in Healthcare that can be made intelligent through various techniques and that affords great opportunity for really smart decisions to be made that can be nearly fully automated.

And then, finally, after Consensus is arrived upon by using Smart Contracts then a Digital Ledger is either updated or not. A Digital Ledger is a shared, current real-time state of ‘truth’. This is like a gigantic distributed database where each computer in a blockchain has its own copy of the database and it is always updated to reflect the most accurate version of the ‘truth’, whatever that may be. The Digital Ledger is always synced among peer members and updated (i.e. adding ‘blocks to the chain’) with the latest version.

In my particular case, my medical record Digital Ledger would include all previous interactions and transactions recorded about my medical history including emergency room records, primary doctor records, surgery records and even my dental records. This is an example of four data sources, however in a real blockchain this could have been hundreds, thousands or millions of computers all working together to make informed, smart consensus decisions. Just imagine how difficult it would be to try and trick a blockchain of any significant size? You would have to reverse-engineer the ledgers of all these verified transactions previously recorded.

As the blockchain grows and gains other supporting nodes, data and more horsepower, then this only increases the level of tamper-resistance, more granular decisions can be formed based on more data and no single point of failure for data.

For these reasons, this is why Blockchain for Healthcare has a bright future in making positive life decisions with intelligent data and can also help prevent medical record mistakes.

This entry was posted in Blockchain, Technology and tagged Blockchain, healthcare. Bookmark the permalink.