Posted on September 8 by admin

Bella’s passing, honestly, is still raw with Brandee, Jack and I and this is no kidding. Five months later and we still miss our little sweet Bellaringa; and will miss her forever I’m sure. She is the greatest but it’s heartening to know that her wonderful legacy lives on!

However, today’s blog is about a Bleu update. It’s very difficult to share updates about Bleu, as much as I would like to, but it hurts because I always think about Bella. Nevertheless, here goes with a Baby Bleu update.

Blue was officially rescued from the great San Jose Animal Care Center at the young age of 5 weeks old and 1.5 pounds. The rescue was amazing!

I really had no intention of adopting a cat that day. In fact, I was admittedly against it as Brandee and my reason for the visit was to get a puppy that could re-energize Jack’s, and our, broken spirits since Bella went to Rainbow Bridge. But, as I was walking by the cat habitats at the Center this little, tiny, jet-black kitten (that wasn’t even a grand total of six-inches long) began to scratch at the glass and got my attention. She immediately grabbed my heart and the rest was history. After about only one hour after I met Bleu, we were taking her back to her forever home.

Apparently, she was there with one of her sisters which had be already been rescued when we visited the Center and Bleu was left behind. I knew from the second that I saw her that she was going to be a part of our family so we went through the adoption process and the great folks at San Jose Animal Care Center were absolutely awesome!

I cannot thank all the wonderful people at the San Jose Animal Care Center enough. They all are so awesome, terrific and compassionate. The volunteer that interviewed me for Bleu’s rescue was such a nice and caring guy. All the nice ladies that helped process the paperwork were very sincere. It was a very pleasant experience indeed. 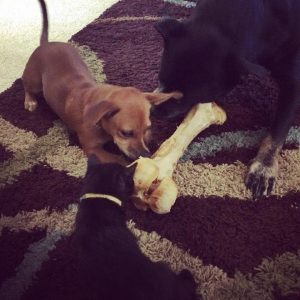 Fast-forward from a little-Baby Bleu of six inches long (at 5 weeks old) to now, 5 months later, an 8.7-pound young girl. Bleu is such a fantastic sister to her two canine brothers. Each of the canines has extremely different temperaments and Bleu does a great job to navigate these dangerous territories.

Bleu treats them 100% completely different and it’s quite amazing. With our puppy, Gracie, which is a 11-month old chiweenie, Bleu is as aggressive as can be and they play nearly all day long as loving sisters. Both Gracie and Bleu were rescued on the same day, and although they had never met each other until we brought them home together, they act like biologically-integrated sisters. With Jack, Bleu’s behavior is completely different because Jack is more slow and deliberate. Therefore, Bleu has no fear of his nearly 100-pound brute body, yet just leaves him alone. Also, Jack’s totally chill nature is really awesome as we have no fear whatsoever that he would ever hurt Bleu. Sometimes Jack and Bleu will cuddle on chilly nights so this winter should be interested for all of us.

Brandee and I have left the door wide open for Bleu to come and go as she wishes. Although we really considered this a lot and it was an extremely tough decision, we ultimately decided that she needs to be free as an indoor/outside cat. Thus far, knock-on-wood, I think this is the best result for everyone. Bleu loves her freedom, and sometimes wanders too far off, yet still stays within range.

This entry was posted in Bella, Bleu, Gracie, Jack and tagged bleu-berry. Bookmark the permalink.