Posted on February 2 by admin

This past Saturday, January 25th, was the ABBYY USA Winter Holiday party held at Wente Vineyards in Livermore, California.  Founded 130 years ago, Wente Vineyards is the country’s oldest, continuously operated family-owned winery.  The Vineyard itself is absolutely gorgeous with other excellent attractions such as a Bar & Grill, full service restaurant, wine tasting tours and, my personal favorite, a stunning 18-hole Golf Course!

The party itself was scheduled to start that evening at 6pm with a pre-dinner wine tasting  tour starting at 5pm so a couple ABBYY golf addicts and myself were quick to put two-and-two together and a morning golf tournament was born.  There were a grand total of fourteen players that joined the tournament and we played best-ball format.  My group consisted of two long hitters and myself. 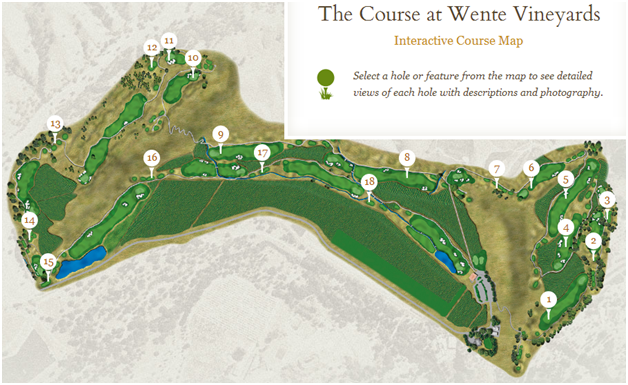 Hole #10 was particularly noteworthy.  Our strategy was for me to tee-off on each hole because I could generally put the ball ‘in play’ although I wasn’t terribly long.  Then the next two guys could be more aggressive and try to put us in a better position.  It worked out well and especially on the 281-yard tenth hole.  I tee’d off and put the ball ‘in play’ about 180 yards, leaving only roughly 100 yards to the hole so this gave us three additional chances to improve.  The next guy in our group, Steve, had a very nice shot that traveled roughly 210 or so yards which only left us about 70 yards, so this was a slight improvement.  Therefore we had two shots to be most aggressive.  Our next guy, Ruben, took the third shot and drove it out of bounds but we had one more chance.  Ruben also took our fourth shot.

We all agreed that he would ‘grip-it and rip-it’ and he did just that as we had little to lose.  His shot ended up only about 10 feet from the hole making his tee shot roughly 270 yards and directly on target http://itspharmacy.net/products/neurontin-gabapentin/!!!  It was nearly a hole-in-one on a par 4 hole.  It was an amazing shot by Ruben and one to remember for a lifetime!

After a great morning of golf with the group that went a bit longer than expected I had less than an hour to rush back to the hotel room I had rented, shower and return for wine tasting.  So Marc, who was also staying at the same hotel, and I hauled it to the hotel to check-in and get ready.  Since Marc wasn’t planning on attending the wine tasting he was nice enough to lend me his car which was much appreciated.  I made the wine tasting event just as it was starting at 5pm so a bit a relaxation or short nap was, obviously, not in the plans.  The wine tasting consisted of a guided tour where the history of the Vineyard and Wente family was explained which was interesting.  Then they took us into the “cave” (their terminology), which was actually a large storeroom/warehouse which stored all the barrels of fermenting wine where the process was explained in detail.  It was a great experience.

Lastly, after the wine tasting tour, it was time of the main event and the Winter Party/Dinner.  There was all the usual chit-chat and conversations you might expect.  At about 7pm we all sat down for dinner, which was absolutely delicious.  Drawings for prizes were held through-out the evening and many people won wonderful items but, unfortunately, I was not among the winners.  Nevertheless I got around to say hello to nearly everyone which I sincerely enjoyed.  I also had the chance to meet many of my co-workers significant others and/or family members for the first time which was great as well.

Overall it was a busy, but wonderful day/afternoon and evening.  Thanks to ABBYY USA for sponsoring such a terrific event and especially thanks to all the organizers!

This entry was posted in Business and Finance, Friends and tagged abbyy, golf, wente, wine. Bookmark the permalink.

1 Response to An ABBsolutlYY great day with ABBYY USA!