Posted on May 4 by Kevin 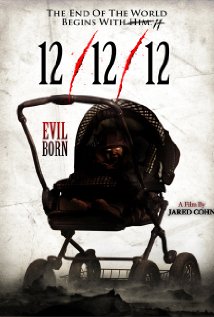 ‘Holy Moly’ is all I can say!  This was truly one for the ages.  Brandee and I were Netflix’in for something to watch other than Columbo.  It wasn’t that we don’t like Columbo – if fact just the opposite but for whatever reason Netflix only has a total of 32 of these episodes to watch???  So since we only have one more unwatched Columbo we decided to save that one for another time and choose a different movie so we picked 12/12/12 and boy-o-boy are we sorry.

To be fair we knew that it only had a one-star rating in the first place so expectations were non-existent that we were about to see a masterpiece but this takes the cake (and the icing with candles and about 5 layers of it too!)

The movie starts with a rather gruesome scene of a lady giving birth.  Long-story short, the instant the kid is born he immediately starts going on a killing rampage.  Apparently this was not God passing-out “Brains” or “Trains” in the delivery room, but rather Satan passing out “Fangs”!  This little Satan’s-spawn murderous technique was consistent throughout this pile-of-dodo film by attacking the neck of his victims.

So the dodo begins to stink even more and more as this goes on and on without much rhyme or reason.  In fact, if this stinky poo had any rhythm at all is was like Carl Lewis butchering his rendition of our National Anthem.

Satan’s-spawn wasn’t even a good Chuckie type baby.  There were no special effects whatsoever to show the Spawn’s movement.  The makers of this excrement won and the joke was on me because I ended up watching to the end like a train-wreck that I couldn’t turn away from.  In fact this manure-filled train had like fifteen locomotives too!  And they all ran me over, then backed-up, then ran over me again and then dumped (literally) the dump on me!

Somehow this other dude was in cahoots with Spawn and some stuff happened that I didn’t care about and then, surprisingly enough, had a climatic ending and ended. What a shocker huh???  Actually, I shouldn’t be so quick to judge.  The only redeeming value in watching this potty-filled mud was that the ultimate flush was that this ended on the date of 12/21/12 when the ancient Mayans had predicted the end of the world.  FLUSH!  You see, as lame as that is, that is the only thing I can even imagine the writers of this dog-waste were thinking was to make the connection between the two dates of 12/12/12 and 12/21/12.  It’s giving me flashbacks to my binary computer programming days with all these 1’s and 0’s.  Are 1’s and 0’s really that spooky that you make a movie about them?

Anyhow, don’t ever watch this down-the-toilet turd.  I have wasted enough of my life watching, and then writing about 12/12/12 and it’s flush-ability-ness.  I can only hope that 13/13/13 will be better.

I am extremely interested in both current events and the ever evolving world of technology. Business and finance have exceedingly become important areas to me, as well. Over the next few years, I hope to log many interesting personal views and opinions concerning important aspects of the world in which we live. Keep in mind that all content posted by me on this web site reflects only my personal views and opinions and not those of anyone else.
View all posts by Kevin →
This entry was posted in Movies and tagged 12/12/12, 12/21/12, spawn. Bookmark the permalink.